Monty Marsh is an award-winning multicultural Director and Producer. After earning an Economics degree from the University of North Carolina at Chapel Hill, Monty spent time in front of the camera as a model and actor, before joining Cinemedia Film AG's North American Film Finance Division. There, he was responsible for researching, forecasting and presenting film financing opportunities to the Executive Team. Though Monty gained valuable experience packaging projects, employing creative financing and negotiating deals, the importance of 'Story' became paramount in his process. This led Monty behind the camera, and he has since worked in every facet of production with multiple A-List production companies in both Los Angeles and New York. In 2016, Monty made history by directing and co-producing YouTube's first live 360 performance. His 'Not Above That' VR experience premiered by WIRED Magazine was nominated as 'Best Interactive Music Video' at the Austin Music Video Festival, was featured as one of the three best VR music videos in the field by VR Days Europe and it made VR Scout's 'Essential VR Music Videos of 2016' list. The 2D version premiered by NPR was also an Official Selection of the Austin Music Video Festival. Monty is one of 12 directors chosen internationally to participate in Motionpoems' Season 8 (2017): 'Dear Mr. President'. His short film 'Song of the Mutant Super Boars' made possible in part by The Knight Foundation, The Archie D. & Bertha H. Walker Foundation, and The Andy Warhol Foundation For The Visual Arts is a 2018 Official Selection of The Zebra Poetry Film Festival in Berlin with submissions from 94 countries around the world, and has screened in both LA, NYC and multiple cities in Germany. Monty's ideation on his Adidas Originals branded short film was lauded as one of the 'Top 5 Creative Ideas of the Week' by AdAge, and received wide coverage from outlets like Adweek, Source and Shots. He is 1 of 32 directors chosen by SHOOT Magazine to be part of their Director's Showcase Class of 2019. His short film NOAH filmed during the pandemic is 1 of 16 international films to compete at the 2021 Diversity at Cannes Showcase. Monty is a cross discipline thinker and doer, known as much for the stylistic breadth of his work as for its substance. He is currently in development of a slate of entertainment properties for both the big and small screen.

Monty is a self taught photographer, and he has created photo essays for President Obama's 2008 Presidential Campaign, the Washitaw Indians during Mardi Gras for Vogue, Life in Cuba, the Anti-War Movement under President George W. Bush, and numerous portraits from around the world.

He has also completed a digital marketing certification program at General Assembly. As a creative entrepreneur with an affinity for entrepreneurs and creatives, and as a storyteller with a unique understanding of culture from his life shown through his unique lens, Monty constantly endeavors to create work at the intersection of music, fashion, technology, and film. 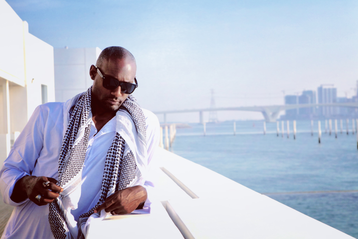